Where is Justice? A panel about the issues of race and police conduct

On Friday, September 26, 2014, three student organizations will co-host a panel discussion about the issues surrounding the shooting death of Michael Brown in Ferguson, MO, and the larger context of the conversation as it applies to the San Diego region.  Please see the flyer below for details and contact Brandon Theus (theusbo@tjsl.edu )with any questions or concerns).

If you have had interactions with the police that you would like to report, the City of San Diego has an anonymous hotline.  Learn more here.  Scroll down to learn a bit more about the panelists 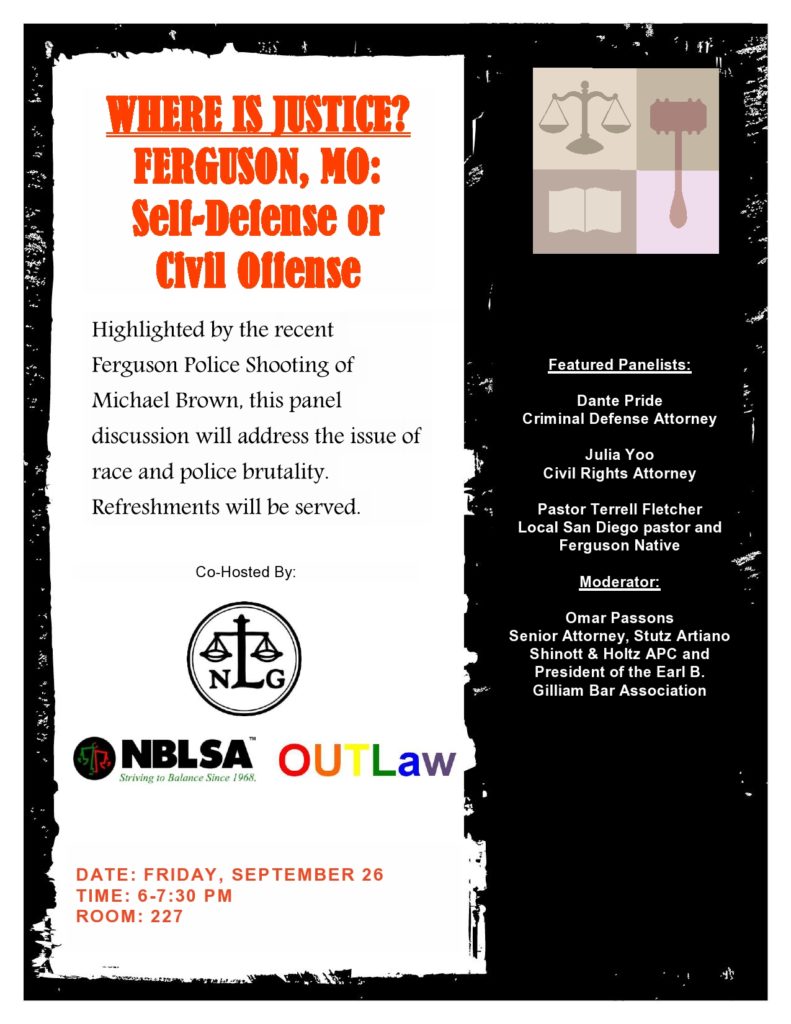 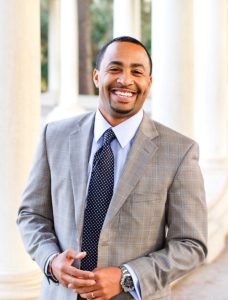 Born and raised in St. Louis, MO., like many in his neighborhood Terrell had dreams of playing professional sports.  Because of his athletic ability he was awarded an athletic scholarship to the University of Wisconsin and majored in English Literature.  His contributions helped the teams he played on, to win the 1994 Rose Bowl and 1995 Outback Bowl. In April of 1995, Terrell was selected in the NFL draft by the San Diego Chargers.

During his college years Terrell’s life began to take an unsavory twist.  Challenged by a friend to revisit his walk with Christ, Terrell committed his life to Christ and this has been his constant motivation since that time.  Terrell is an ordained Elder and has a BA in English Literature and a Master’s degree in Religious Studies.  Currently, he is a Doctoral candidate at Bakke Graduate University.

A man of transformation, during his time in the NFL, Terrell was active community participant.  He served as the chairman/spokesman for Jr. Achievement, San Diego County Adoptions, and served with a group of teammates who made meals to feed San Diego’s homeless.  Through Destiny-N-Me, Terrell offered annual college scholarships to deserving teens and hosted assemblies aimed at acquainting trouble teens with positive role models.  He was also active in his local church, where he taught a bible study and frequently treated the young adults to a pro football game.

Today, Terrell serves as the Sr. Pastor of the City of Hope International at Faith Chapel, a thriving multicultural ministry based in San Diego, CA.  His motivating messages have made him a sought after speaker in multiple circles.  He has shared the message of transformation and hope in many parts of the world including Nigeria, Cote d’lvoire, Uganda and Belize.  He is driven by his passion to serve people of all persuasions, backgrounds and conditions toward their God given destiny.

Terrell balances his life with his lovely wife Sheree and son, Trey. 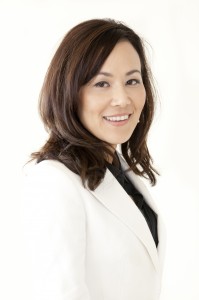 Julia Yoo is a civil rights attorney in San Diego, California.  She represents a broad spectrum of people whose civil rights and liberties have been violated.  The types of cases Ms. Yoo focuses on include retaliatory arrests, First Amendment protests, excessive force, wrongful death, unlawful detention, sexual harassment and prisoners’ rights. Ms. Yoo has successfully tried and resolved cases throughout California and Colorado.  These cases include a $4.1 million settlement for UCSD student Daniel Chong who was left for four and a half days in a DEA holding cell without food and water.  She has litigated a number of civil rights cases on behalf of prisoners denied medical care and sexually harassed or assaulted by prison staff.

Ms. Yoo is also responsible for obtaining leading appellate decisions, including Bryan v. MacPherson, 630 F.3d 805 (9th Cir. 2010), the first case in which the Ninth Circuit held that that the use of a Taser “must be justified by the government interest involved” because it constitutes “an intermediate, significant level of force” that “intrudes upon the victim’s physiological functions and physical integrity in a way that other non-lethal uses of force do not.”

Ms. Yoo is an AV rated attorney and the named partner in Iredale and Yoo.  She serves on the Board of the National Police Accountability Project and previously served for ten years on the Board of Colorado Criminal Justice Reform Coalition, a non-profit organization that was formed to halt the exponential growth in the state prison population.  She is an adjunct professor of Civil Rights and Civil Liberties at Thomas Jefferson School of Law and a graduate of Wellesley College and the University of Colorado School of Law. 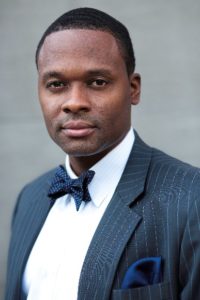 Dante T. Pride is the founder and Managing Attorney of The Pride Law Firm in San Diego, California. Mr. Pride attended Morehouse College in Atlanta, Ga., where he received a full academic scholarship. While at Morehouse, Mr. Pride was a member of the honors program and named to the dean’s list. Mr. Pride graduated from Morehouse with a Bachelor’s Degree in Psychology.

Having a passion for advocacy, Mr. Pride then attended the University of San Diego School of Law, where he excelled in Advanced Trial Advocacy and was the Vice President of the Student Bar Association. During law school Mr. Pride was also a certified legal intern and worked at the Office of the Alternate Public Defender, where he defended indigent clients against criminal charges ranging from minor misdemeanors to major felonies.

Upon graduating from law school, Mr. Pride accepted a position at a prestigious San Diego law firm where he practiced Employment and Labor litigation. While protecting some of the United States’ largest companies, Mr. Pride gained valuable experience and considerable knowledge in all facets of civil litigation. Armed with this experience, Mr. Pride knew that his true calling was to defend the rights of individuals.

Harkening his fellow Morehouse alumnus, Dr. Martin Luther King Jr., Mr. Pride decided to blaze his own trail and start The Pride Law Firm based on the idea that “Injustice anywhere, is a threat to justice everywhere.” Focusing on Employment Law, Criminal Defense and Personal Injury, Mr. Pride employs meticulous attention to detail and zealous advocacy, to protect his clients’ rights and eradicate injustice in both state and federal courts.