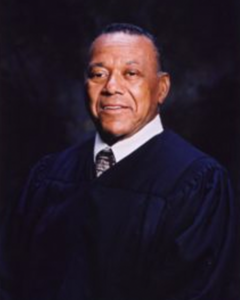 Earl B. Gilliam received his Bachelor of Arts degree from San Diego State College in 1953 and his Juris Doctor from Hastings College of Law in 1957. That same year, he began his legal career as a deputy district attorney in the San Diego District Attorney’s Office.

In 1961, he went into private practice and continued in that capacity for two years before becoming a San Diego Municipal Court judge in 1963. He subsequently became the first African American to serve as a San Diego County Superior Court judge in 1975. In 1980, President Jimmy Carter appointed him as a judge of the United States District Court, Southern District of California. In 1993, he attained senior status at the United States District Court. Judge Gilliam was the first African American U.S. District Court Judge for the Southern District of California.

In addition to serving as a judicial officer, Judge Gilliam also worked as a law professor at Western State College of Law, an instructor in Urban and Rural Studies at the University of California at San Diego and as a guest lecturer at the United States International University. Due to his many contributions to the legal community and the community at large, Judge Gilliam was honored with more than a dozen awards during his legal career, including the following: San Diego Chamber of Commerce Young Man of the Year (1965), San Diego Citizen of the Year (1973 and 1994); San Diego Good Guy Award (1974); Boy’s Club of San Diego Golden Man of the Year (1981); San Diego Trial Lawyers Association Trial Judge of the Year (1981); and a place on the San Diego High School Wall of Honor (1994).