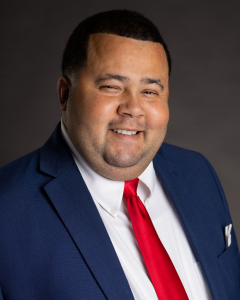 Michael Flemming is a Deputy Public Defender assigned to the San Diego County Primary Public Defender’s Office in Vista. Prior to becoming a Deputy Public Defender, Michael was a Special Assistant at Western Area Counsel Office aboard Camp Pendleton Marine Corps Base. While at Western Area Counsel, Michael advised the Commandant of Marine Corps, military commanders, and civilian leaders on an array of civilian personnel, legislative, and ethics issues. In law school Michael was a Legal Fellow, on Capitol Hill, for the Office of the Senate Majority Leader where he focused on Defense and Intelligence issues. Michael obtained his Bachelor’s of Arts in International Studies, with a minor in Chinese, from the Croft Institute of International Studies at the University of Mississippi. And, received his Juris Doctorate from Thomas Jefferson School of Law. Michael is an avid sports fan who resides in Vista with his wife Vanessa and son Dryden.